The show promises to be a modern-day burlesque that uses art as a theme, with 200 of Broadway’s sexiest bodies strutting their stuff on stage at the Roseland Ballroom in New York. 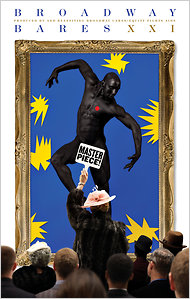 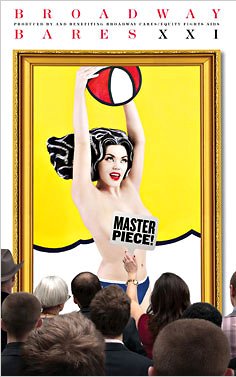 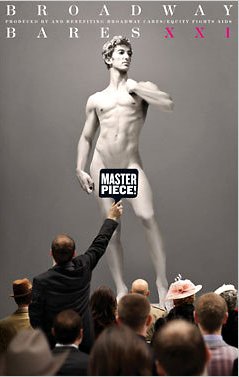 The show will be executive produced by Legally Blonde director and Catch Me If You Can choreographer Jerry Mitchell.

The first Broadway Bares was back in 1992 featuring seven dancers stripping on a bar to raise $8,000. In the 20 editions since, they have raised more than $7.5 million.

The UK charity TheatreMAD, part of the Make A Difference Trust, run a UK version of the event, West End Bares, which last ran in September at the Cafe de Paris, also exec produced by Jerry Mitchell. West End Bares: Strip Britannia raised nearly £42,000 for charity, and their next event is West End Eurovision on 21 April 2011 at the Piccadilly Theatre, seeing the casts of West End shows battle it out to be crowned West End Eurovision winner. Special guests will include the original Buck’s Fizz.

It’s worth mentioning that Broadway Cares also run an annual event for the last seven years called ABC Daytime Salutes Broadway Cares. The Grand Finale Celebration was last week, 13 March 2011, and saw an evening of Broadway song and dance at New York City’s The Town Hall from over 20 American daytime TV stars. The event has raised $1,850,000 in total over the last few years – something for the UK charity to think about. I can easily see “ITV Salutes the West End” – would love to see the Loose Women, Emmerdale and Corrie teams giving us some showstoppers!

">
Netflix delays UK release of Matilda The Musical movie
">
Photos: Miz Cracker in Who’s Holiday! at the Southwark Playhouse
">
Jenna Russell, Cyril Nri to star in Further than the Furthest Thing at the Young Vic
">
No Limits to play the Turbine Theatre starring Natalie May Paris
">
Marylebone Theatre announces new plays for 2023
">
Hex reviews at the National Theatre
">
2:22 A Ghost Story cast announced for the Lyric Theatre including Girls Aloud’s Cheryl
">
Now on sale: We Will Rock You at the London Coliseum
">
Roxana Silbert steps down at Hampstead Theatre due to funding cuts
">
Orlando Reviews starring Emma Corrin ★★★★
">
Casting revealed for Titus Andronicus at Shakespeare’s Globe
">
Almeida Theatre reveals casting for The Secret Life of Bees
">
La Clique – Save up to 40%
">
Casting announced for Women, Beware the Devil at the Almeida Theatre
">
Orlando first-night photos of the Garrick Theatre premiere
">
Show of the month: Jersey Boys – Save up to 50%
">
New Sound Stage monologues to explore the Black British community’s relationship with the Covid 19 Vaccine
">
Photo: Mandela production photos at the Young Vic
">
Vardy v Rooney transfers to the Ambassadors Theatre
">
Groundhog Day The Musical heads back to the Old Vic in London