The Whatsonstage Awards were announced last night, 20 February 2011, at the Prince of Wales Theatre in London. Musical Legally Blonde at the Savoy Theatre won four awards including best new musical and best actress in a musical for Sheridan Smith, who played leading lady Elle Woods in the show until last month.

It was also a good night for outdoor London venues as best new play went to Howard Brenton’s Anne Boleyn at Shakespeare’s Globe, which is returning to the venue this summer, and best director went to the Open Air Theatre’s artistic director Timothy Sheader for his 2010 summer productions of Into the Woods and The Crucible.

Other big winners included Les Miserables, which grabbed best ensemble performance and best theatre event of the year for its 25th anniversary concert at the O2, and best musical revival for the national touring production which ended its run at the Barbican theatre last autumn; and best West End show went to Wicked at the Apollo Victoria, with the show’s current star Rachel Tucker winning best takeover in a role.

Best actress was awarded to Zoe Wanamaker for her performance in All My Sons at the Apollo Theatre, alongside her co-star David Suchet, who picked up best actor. Love Never Dies, Andrew Lloyd Webber’s sequel to The Phantom of the Opera, also won two awards, with Ramin Karimloo taking home best actor in a musical, joined by Joseph Millson as best supporting actor in a musical.

The annual awards, which are voted for by members of the public, saw 45,000 votes registered this year. See a full list of winners here.

Public voting is now under way for the Olivier Awards Audience Award, to be announced on 13 March. See WestEndTheatre.com’s new Olivier Awards microsite for further information. 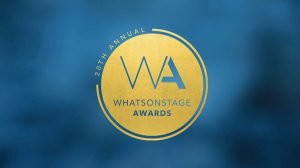 WhatsOnStage Awards 2020 – The Winners in Full