Enjoy discount tickets to the spectacular Apassionata at the O2 Arena 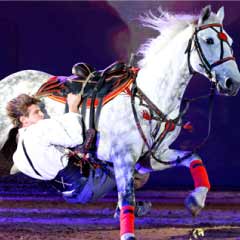 Experience the magic of APASSIONATA, featuring more than 40 horses, fast-paced action and an amazing sound track – all in the spectacular setting of the O2 Arena in London.

APASSIONATA returns to the UK having recently been awarded “Show of the Year” at the 2010 PRG Live Entertainment Awards. Following sell out performances in over 30 cities across Europe, APASSIONATA will now leave audiences star-struck with two performances at The O2 on the 29th and 30th January 2011. The unique ‘By the light of the Stars’ tour will captivate any audience with a magical encounter between the human and the horse.

Leyla, our heroine, watches as a star falls from the sky and splinters into stardust right before her eyes, she embarks on a magical journey from her enchanted palace to the magical garden spreading joy to the people she meets along the way. Her journey is disrupted when a dark figure steals the stardust. Together with the mysterious rider Pedro, she sets out to retrieve her precious stardust. And so the adventurous voyage begins….

BOOK NOW: Save up to £12 on tickets to see Apassionata at the O2 Arena