This week’s West End openings include romantic new show Love Story, Christmas treats with Potted Panto, The Night Before Christmas and The Nutcracker, plus Derek Jacobi in King Lear.

Love Story
Love Story gets its official opening night at the Duchess starring Emma Williams and Michael Xavier on 6 December. Erich Segal’s best-selling novel Love Story, which was famously turned into a film starring Ali MacGraw and Ryan O’Neal, has been given the musicals treatment by Howard Goodall and Stephen Clark.

The show had its premiere earlier this year at the Chichester Festival Theatre and was well received by critics, with The Stage calling it a “gorgeous new chamber musical”. The producers of the show include West End star Michael Ball, Adam Spiegel and Stephen Waley-Cohen and it is directed by Rachel Kavanaugh, with design by Peter McKintosh and musical direction by Stephen Ridley. Read our interview with Michael Ball.  Book tickets to Love Story at the Duchess Theatre.

King Lear at the Donmar

The Night Before Christmas

Magical family show The Night Before Christmas opens at the Ambassadors Theatre on 8 December. Meet Father Christmas and see a wonderful story come to life in this brand new show, full of songs, poems and stories. Book tickets. 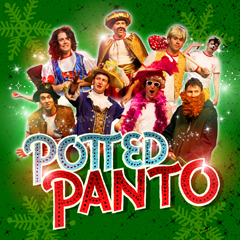 Potted Panto
Those CBBC rascals Dan and Jeff bring Pantomime mayhem to the Vaudeville with Edinburgh family hit Potted Panto on 10 December. CBBC’s Dan and Jeff, the masterminds behind Potted Potter and Potted Pirates, turn their attentions to that much loved British institution, the pantomime. Potted Panto crams seven much-loved pantomimes into one show. Dan and Jeff career through Cinderella in 3D, dazzle with a Dick Whittington featuring Jeff as the Mayor of London and struggle to work out how two people can play seven dwarves and which of them will make the prettiest princess. From conventions and costume to heroes and villains, the dastardly double act explores all the elements of the art form we both love and loathe as a nation. Book tickets to Potted Panto at the Vaudeville Theatre.

And next week… A Flear in her Ear opens on 14 December at the Old Vic starring Tom Hollander, Lisa Dillon and Jonathan Cake.