First look and listen to Anna O’Byrne’s haunting version of ‘Somebody’ from the premiere of Michel Legrand’s Tony Award-nominated musical ‘AMOUR’ at Charing Cross Theatre.

O’Byrne originated the role of Christine in the Australian production of Andrew Lloyd Webber’s Love Never Dies and subsequently made her West End debut playing Christine in The Phantom of the Opera. She most recently played Laura Fairlie in the West End revival of The Woman in White and Eliza Doolittle in Julie Andrew’s 60th anniversary production of My Fair Lady at Sydney Opera House.

Michel Legrand’s musical fantasy is set in 1950s Paris and follows a shy, unassuming civil servant, Dusoleil, who gains the ability to walk through walls that sets him on a journey of self discovery and gives him the confidence to woo the beautiful Isabelle and, just for a while, live the life he has always longed for.

The piece is directed by Hannah Chissick with choreography by Matt Cole, design by Adrian Gee, lighting by Rob Halliday, sound Andrew Johnson and musical directions by Jordan Li-Smith. 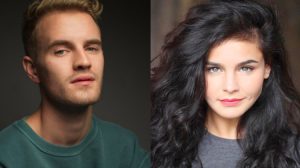