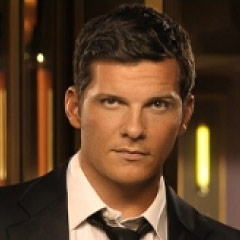 2011 is going to be a big year for big musicals, with The Wizard of Oz opening in March, and the UK premiere of Shrek The Musical making its way to the Theatre Royal Drury Lane in May.

Lucky then for Nigel Harman, who has been cast as Lord Farquaad in the mega-musical that is sure to be a huge hit with West End audiences.

Best known for playing heart-throb Dennis Rickman in BBC1’s EastEnders, Nigel has also worked extensively in theatre, with roles including Three Days of Rain at the Apollo, Sky Masterson in Guys and Dolls at the Piccadilly Theatre and on tour, True West at the Sheffield Crucible and Privates on Parade at the Donmar Warehouse.

In addition to EastEnders, TV and film roles include BBC1’s Hotel Babylon and Blood Diamond.

In Shrek The Musical he will be joined by Nigel Lindsay as Shrek, Britain’s Got Talent judge Amanda Holden as Princess Fiona and Richard Blackwood as the Donkey.