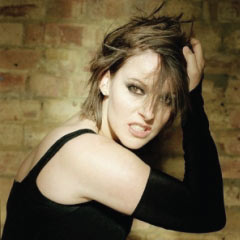 For years she has won plaudits and praise for her musical talents, appearing in a wealth of big musicals including She Loves Me (for which she won an Olivier Award), Crazy For You, Chicago, Miss Saigon and Oliver!

But we shouldn’t forget that her talent for comedy, and experience of appearing in a variety of plays, will stand her in good stead when she appears as the beautiful, sultry Elvira in Noel Coward’s witty comedy Blithe Spirit (opens at the Apollo Theatre in London from 2 March 2011).

Henshall will be in good company, playing alongside Alison Steadman (Gavin and Stacey) as Madame Arcati, and Cold Feet’s Hermione Norris (Spooks) and Robert Bathurst (Alex) as Charles and Ruth Condomine.

Ruthie trained at Laine Theatre Arts in Epsom, Surrey, swiftly landing a role in a touring production of A Chorus Line before making her West End debut in Cats at the New London Theatre.

Then at 21she was cast as Ellen in Miss Saigon at the Theatre Royal, Drury Lane, followed by Children of Eden at the Prince Edward Theatre and then a season at the Chichester Festival Theatre, performing in Shakespeare, Moliere and the musical Valentine’s Day.

Ruthie then played Fantine in Les Miserables at the Palace Theatre, and followed this in 1993 by returning to the Prince Edward Theatre to play Polly in Crazy for You, for which she was nominated for her first Olivier award. Her next part got her the award – playing Amalia Balash in She Loves Me at the Savoy Theatre.

Next up she played Nancy in 1996 in Sam Mendes’ revival of Lionel Bart’s Oliver!, then a quick Chichester run playing Polly in Divorce Me, Darling before a biggie – starring as Roxie Hart in the London production of Chicago at the Adelphi Theatre.

She then went to Broadway, appearing in Ziegfeld Follies of 1936 before playing Velma Kelly in the Broadway production of Chicago, Miss Saigon and Putting It Together.

Back in London she starred as Peggy Sue in Peggy Sue Got Married, and then in 2001 took a part in The Vagina Monologues at the Arts Theatre. After playing Velma in the London production of Chicago, and touring the UK in Fosse, she joined the cast of Andrew Lloyd Webber’s The Woman In White at the Palace Theatre.

In 2006 she returned to New York to play Emma in David Ives’s two-hander The Other Woman and in 2007 starred in the Encores! production of Stairway to Paradise at City Centre.

UK and US concert tours followed, including her Proms debut at the Royal Albert Hall in 2004, plus a feature film – Ahrens and Menken’s A Christmas Carol with Kelsey Grammer and Jane Krakowski – and TV roles in Law and Order and Mysteries of 71st Street for CBS.

In 2008 she took the lead in Marguerite at the Theatre Royal Haymarket.