A review round-up for Quiz at the Noel Coward Theatre, London

With James Graham’s fourth West End show (This House, Ink, Labour of Love) gaining rave reviews, it’s easy to see why everything he creates turns into a sell out winner.

Inspired by real-life events, Graham’s sensational new play cleverly blurs a quiz show into a courtroom drama, and is directed by Daniel Evans (American Buffalo). It stars Keir Charles as Chris Tarrant and Gavin Spokes as Charles Ingram, and focuses on the so-called ‘coughing major’, the 2001 contestant who was accused of cheating on the ITV show Who Wants to be a Millionaire?

But was he really guilty? Let the audience decide.

“Graham has a rare gift for tackling meaty, state-of-the-nation subjects with a popular (never ponderous or patronising) touch and one of his fascinations is with consequences of living in an age of populism.

With its mix of populism, personal tragedy, politics, and even a pub quiz, this is sure to be another hit for a playwright on a roll.”

“James Grahamís portrayal of the ëcoughing majorí scandal is a whirling, neon wonder that makes for utterly compulsive viewing.

Can we truly believe our eyes and ears, or do we only ever see what we want to see? In James Grahamís glittering play you can take your pick from an array of alternative facts, but you might struggle to find the truth among the razzle-dazzle. One thingís for sure, though Quiz is a winner.

Part garish, interactive game show, part courtroom drama, it probes the 2001 scandal of Charles Ingram, the ‘coughing major’ accused of cheating on ITVís Who Wants to Be a Millionaire? Beneath the shiny surface, thereís also an astute exploration of the ways in which manipulated narratives and false perceptions distort almost every aspect of modern life, from the creep of showbiz into politics to the rise of reality TV.” 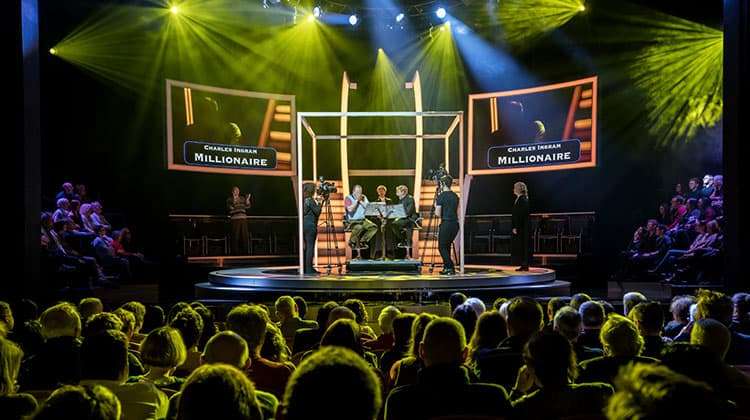 “We’re constantly reminded we’re in a theatre. Yet what with the roving crew, the distracting bustle and the large video screens showing live feeds, it’s as if we’ve entered a TV studio.

Rewinding from the 2003 trial which found Major Charles Ingram guilty of procuring the execution of a valuable security by deception we’re given a potted history of light entertainment in general, the show in particular and the way the Ingrams (Mr and Mrs) were determined to get on Millionaire, where, with the help of an accomplice, a life-changing win became life-ruining.

The first half builds the case for the prosecution and we share in the incredulity that crosses the furrowed brow of Keir Charles grimacing send-up of Chris Tarrant.

Our adrenalin levels are pumped by showbizzy noise and fitful quiz-rounds of our own (there are gizmos to press). The second half, though, invites sympathy for Gavin Spokes blustering Major and Stephanie Street’s just-trying-to-help Diana Ingram as the hesitations and agonies of the quiz-rounds are replayed and the evidence tilts in flummoxing directions.

We vote, twice; a question of justice becomes nail-biting entertainment and certainty flies out the window. Very neat. Very welcome.”

James Graham’s drama about a game-show scandal is a piercing inquiry into truth and misinformation.

Graham and his director Daniel Evans neatly conflate game-show and courtroom format, zipping from one interrogation to the other and packaging the whole thing in entertaining razzamatazz. The neon-lit, spinning cube of Robert Jones’s set starts to suggest both Ingram’s personal disorientation as his life falls apart and the dizzying loss of certainty.”

“I was a lone naysayer for Quiz’s Chichester premiere, finding the play frantic and unfocused. It’s not perfect now, there are still too many distracting bells and whistles; tantalising ideas are left hanging but it’s sharper and more streamlined and, vitally, more sure of its central thesis: what is true when so many aspects of modern life have become a type of blended reality?.

After a skittish start, both script and production settle down and the central thrust of the narrative kicks in: did Charles Ingram (Gavin Spokes), his wife Diana (Stephanie Street) and quiz fanatic Tecwen Whittock (Mark Meadows) collude to cough-cheat their way to the top prize on Millionaire?

This Quiz comes up with a pretty decent score.” 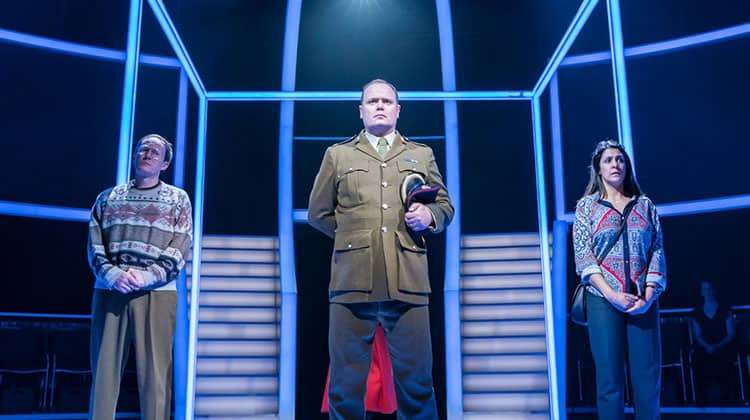 “What a kinetic, eccentric, furiously exciting show James Graham and his director Daniel Evans have crafted.

Styled like a quiz show blurred into a courtroom drama, it puts naturalism to the sword, bombarding us with a wilfully ridiculous portrayal of ‘Millionaire’ host Chris Tarrant (brilliant work from Keir Charles), offering both a hilarious brief history of British TV quiz shows and an actual quiz for the audience. (Full disclosure: your humble critic won the press night quiz).

There is a certain glibness to ‘Quiz’, a sense that it uses bells and whistles and demonic chutzpah to prod us along rather than more conventional virtues of solid characterisation or watertight plotting. But form follows function, and ‘Quiz’ is a ruthlessly efficient piece of entertainment that raises an alarm about the dangers of ruthlessly efficient pieces of entertainment. The glory days of ëWho Wants to be A Millionaire?í may be over, with its scheduled Jeremy Clarkson-fronted revival essentially a retro curio. But Graham suggests that we are living in a reality based upon its founding principles, and it’s not clear that we have any lifelines left.”

Quiz is booking until 16 June at the Noel Coward Theatre, London 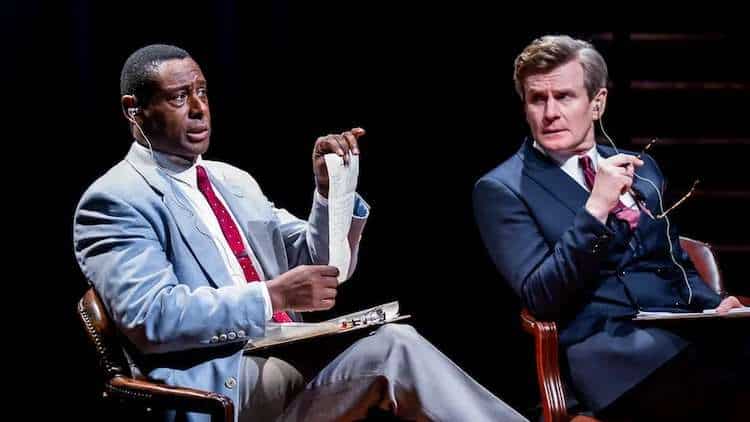