Save over £30 on tickets to see each of these three fabulous West End musicals: Blood Brothers starring Nikki Evans at the Phoenix Theatre; Dreamboats and Petticoats starring Tony Christie at the Playhouse Theatre; and All The Fun of the Fair starring David Essex at the Garrick Theatre. 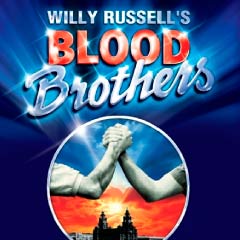 The incredible score includes Bright New Day, Marilyn Monroe and the emotionally charged hit Tell Me It’s Not True. Hailed as one of the best musicals of all time – scooping up no less than four awards for best musical in London and seven Tony Award nominations on Broadway – Blood Brothers is celebrating 22 years in London’s West End.

Special offer: Save £31.50 on tickets to Blood Brothers at the Phoenix Theatre 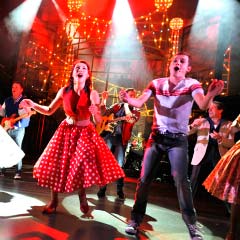 70s pop star Tony Christie (“Is This The Way To Amarillo”) and hot new star Alexis Gerred star in the joyous musical Dreamboats and Petticoats.

Inspired by the albums, Bill Kenwright and Laurie Mansfield in association with Universal Music present Dreamboats and Petticoats The Musical, written by Marks and Gran, the team behind Goodnight Sweetheart, Birds Of A Feather, and Shine On Harvey Moon, will give you the greatest time of your life – taking you back to a time when each passing week brought another classic track. Featuring songs from Roy Orbison, The Shadows, Eddie Cochran, Billy Fury, Chuck Berry and many more.

In 1961 emotions run high as talented young musicians Norman and Bobby compete to win the hearts of their adoring female fans – and more importantly, the gorgeous Laura. But when Laura shows that she’s no slouch with the guitar, rock ‘n’ roll fame beckons…..

Featuring the hit songs Lets Dance, To Know Him Is To Love Him, Shaking All Over, In Dreams, Bobby’s Girl, Three Steps To Heaven, Little Town Flirt, Only Sixteen, Almost Grown, Sleepwalk, Runaround Sue, The Locomotion, Happy Birthday Sweet 16, What A Wonderful World, Half Way To Paradise, Will You Still Love Me Tomorrow, Let’s Twist Again and many more hits from music’s golden era!

Special offer: Save £30.50 on tickets to see Dreaboats and Petticoats at the Playhouse Theatre

All the Fun of the Fair 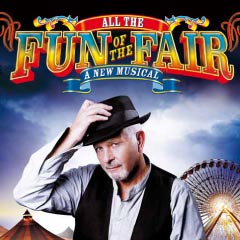 David Essex and Boogie Nights creator Jon Conway invite you to a roller coaster ride of a musical, underscored by a helter- skelter of David Essex hit songs.

Inspired by David’s debut album ‘All The Fun Of The Fair’, David plays fun fair owner Levi Lee, recently widowed and father of a rebellious teenage son. Danger and mysticism lurk in the future, as predicted by the gypsy fortune teller who is in love with Levi. This moving and contemporary story with a heartbreaking twist, reaches out to every parent and anyone who has ever been torn in love.

Dodgems and motorbikes, crafty cons and candy floss, fairground horses and fights, along with romance and rock and roll bring out the carnival atmosphere in this fun-loving show.

Fabulous songs in the show- all hits for David Essex – include A Winter’s Tale, Hold Me Close, Gonna Make You A Star and Silver Dream Machine.

Alongside David Essex, the cast includes Christopher Timothy, Louise English and the leading role of the son, Jack, will be played by Michael Pickering.

The show is directed by David Gilmore with set and costume designs by Ian Westbrook.

Special offer: Save £30 on tickets to see All The Fun of the Fair at the Garrick Theatre