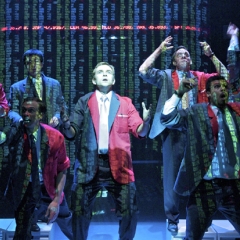 Based on real life events and using music, movement and video, Enron explores one of the most infamous scandals in financial history, reviewing the tumultuous 1990s and casting a new light on the financial turmoil in which the world finds itself in 2009.

Written by Lucy Prebble, whose debut play The Sugar Syndrome won the George Devine Award and the Critics’ Circle Award for Most Promising Playwright, Enron premiered at the Royal Court directed by Rupert Goold. He has previously directed the award-winning Macbeth and Six Characters In Search Of An Author (both Gielgud theatre). More recently he has directed Pete Postlethwaite in King Lear (Young Vic), Michael Gambon and David Bradley in No Man’s Land (Duke of York’s theatre) and Rowan Atkinson in the revival of Lionel Bart’s musical, Oliver! (Theatre Royal Drury Lane).

BOOK NOW: Save £11 on tickets to see Enron at the Noel Coward Theatre in London