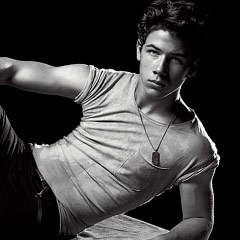 In terms of star casting it doesn’t get much bigger than popping one of the Jonas Brothers in to your West End show.

Cameron Mackintosh once again proves he has a canny eye for stunt casting by tempting Nick Jonas over to London to appear as Marius in the London production of Les Miserables at the Queen’s Theatre this summer.

It may only be for three weeks, from 21 June, but it will do the show’s profile as much good as Susan Boyle AND its 25th anniversary rolled in to one.

Jonas will also join the cast of a special concert performance of Les Mis on Sunday 3 October at the O2 in London, featuring more than 300 actors and musicians, including Alfie Boe as Jean Valjean, Nick Jonas as Marius, Norm Lewis as Javert, Little Britain star Matt Lucas as Thenardier, Miss Saigon star Lea Salonga as Fantine, Jenny Galloway as Madame Thenardier, Camilla Kerslake as Cosette and the casts of the original production at the Queen’s Theatre, the UK touring production, including Gareth Gates, and members of the original 1985 London cast.

Nick Jonas is a member of globally successful boyband Jonas Brothers. 17 year old Nick is no stranger to performing on stage, having played the role of Gavroche in Les Miserables on Broadway in 2003. He has also appeared in a number of other Broadway shows from the age of 7 years old onwards, including A Christmas Carol, Annie Get Your Gun, Beauty and the Beast and The Sound of Music.

Nick and his brothers are currently performing a major series of concerts across the US. The Jonas Brothers, Kevin, Joe and Nick, released their first album, It’s About Time, in 2006, which spawned the TRL hit “Mandy”. Their next album, 2007’s Jonas Brothers, went platinum, as did their 2008 release A Little Bit Longer and 2009’s Lines, Vines and Trying Times. They found fame through the Disney Channel movie Camp Rock.

Special offer: SAVE UP TO £18 on tickets to Nick Jonas in Les Miserables at the Queens Theatre in London