Kenneth Branagh's programme at the Garrick Theatre complete with Romeo & Juliet and The Entertainer.

Kenneth Branagh’s programme at the Garrick Theatre complete with Romeo & Juliet and The Entertainer.

Programming for Richard Branagh’s new season at the Garrick Theatre is now complete with the announcement of Romeo & Juliet and The Entertainer alongside the already announced The Winter’s Tale.

Kenneth Branagh will direct Richard Madden and Lily James as the star crossed lovers in Romeo & Juliet and take the title role in The Entertainer under the direction of Rob Ashford.

Branagh recently directed Madden and James in the new live-action Disney blockbuster Cinderella which premiered at the Berlin Film Festival yesterday. Lily James is known to audiences as the lovely Lady Rose in Downton Abbey and is also the star of an epic new War And Peace for BBC TV. Richard Madden recently played Rob Stark in Game of Thrones and is in the new film Bastille Day alongside Idris Elba.

The Entertainer, John Osborne’s post-war drama, is a devastating portrait of fictional vaudeville hoofer Archie Rice, middle-aged and angry, whose downfall has reduced him to playing in a seedy seaside revue in a crumbling music hall. Osborne used the travails of Archie Rice and his family as a way of commentating on the decline of the British Empire and the troubles in the middle east – issues which just as relevant today.

The role of Archie was created for Laurence Olivier by Osborne, at Olivier’s request and premiered at the Royal Court in 1957, since then Revivals have starred Max Wall, Peter Bowles, Corin Redgrave and most recently Robert Lindsay at the Old Vic (2007).

Full casting details and dates have yet to be confirmed. 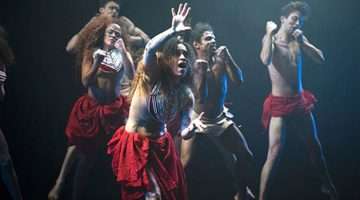