David Suchet is back in the West End this season to play Joe Keller in Arthur Miller’s powerful drama All My Sons.

Acting alongside Zoe Wanamaker, the production is directed by Howard Davies and marks the first great success of Arthur Miller’s influential career.

A compelling story of love, guilt and the corrupting power of greed, Suchet plays Joe Keller, who is alleged to have supplied World War II fighter planes with defective engines, leading to the deaths of innocent pilots – a crime for which his business partner took the fall. One of Keller’s sons, himself a pilot, is thought to have been killed in action. But his mother (Zoe Wanamaker) can’t accept his death and equally, can’t accept that her dead son’s fiancee has transferred her affections to her other son. The confrontations that ensue lead to the uncovering of a shameful family secret… 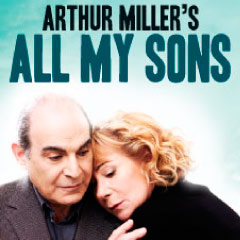