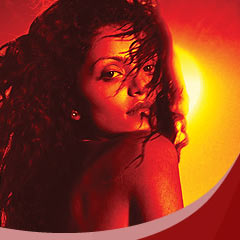 An epic new production of Bizet’s opera CARMEN is coming to the O2 Arena in London this May and will be the first fully staged opera to be performed at the O2.

Sung in English and staged in the round, Carmen is the world’s most popular operas and this  production will be one of the biggest ever staged in London, promising a visual and musical feast including a cast of 200 and breathtaking visual spectacles.

The opera stars Cristina Nassif as Carmen, John Hudson as Don Jose and the Royal Philharmonic Orchestra conducted by Gareth Hancock. Also Darius Campbell will play the Bullfighter for one night only on Sunday 23 May.

From the very first note to the final tragic chords, this stunning in-the-round production of Bizet’s masterpiece vividly portrays the powerful story of lust, superstition, and murder that passionately unravels with fatal consequences.

Carmen at The O2 Arena will be performed by a cast of over 200 artists including dancers, acrobats and fire-eaters. The wonderful set and fabulous costumes wil bring to life the atmosphere of the town square, the cool night air of the smugglers’ mountain hideout and the colourful festivities outside the bullring in Seville.

Sung in English, Bizet’s unforgettable score contains some of opera’s finest arias and best loved music. The rousing Song of the Toreador, the beguiling Seguidilla, the tantalising Habanera and the enchanting Flower Song – sensual music that perfectly captures the very essence of Spain. This world class company of singers, musicians and artists will provide an unforgettable production of Bizet’s Carmen, staged on an epic scale at The O2.

Book now to enjoy £17.50 off tickets to see Carmen at the O2 Arena in London.