Filmmaker Simon Smith has created a stunning movie, comparing footage from London in 1924 and London in 2014. 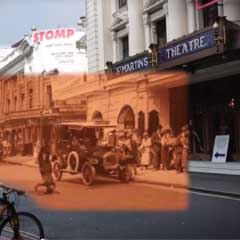 Smith has taken footage from a 1924 series of short films shot by Harry B. Parkingson and Frank Miller documenting London, and cut them against 2014 footage of London.

Simon stood in exactly the same spots as Parkingson and Miller to shoot the film, which directly compares scenes from 1924 and today.