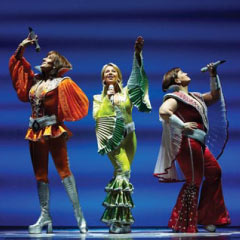 Enjoy a fabulous free meal at Planet Hollywood in London and top price tickets to see ABBA’s Mamma Mia at the Prince of Wales Theatre – all for only £62.50 (ticket face value £62.50). PLUS enjoy a free Q&A and meet-the-cast session after the show, making this a truly unforgettable night out at the theatre.

Mamma Mia! is the smash-hit musical based on the songs of ABBA. The show celebrated its 11th London birthday in April this year and continues to break box office records at the Prince of Wales Theatre.  From West End smash to global phenomenon, “MAMMA MIA!” has already been seen by over 42 million people in over 200 cities across North America, Australia, Europe and Asia.

Inspired by the story-telling magic of ABBA’s timeless songs, writer Catherine Johnson’s enchanting tale of family and friendship unfolds on a Greek island paradise.  On the eve of her wedding, a daughter’s quest to discover the identity of her father brings three men from her mother’s past back to the island they last visited 20 years ago… 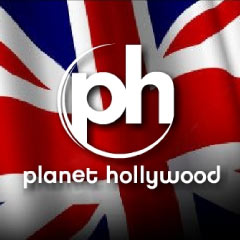 Planet Hollywood is the world’s one and only dining experience inspired by the glamour of Hollywood. The successful restaurant now boasts a large cocktail bar, along with many other themed areas, such as the Bond room, the British room and our trendy Cabana room.  There are still lots of favourite pieces of memorabilia, among them Ursula Andress bikini from the iconic film, Dr No,  R2D2 from the classic Star Wars films and much much more. Planet Hollywood is a madhouse of giant proportions. From the scurrying waiters to the continuous soundtracks to the projection screen going up and down, to the sounds of happy kids, to the visual overload of a collection of museum-quality film memorabilia, Planet Hollywood’s atmosphere is absolutely unique.

Exclusive offer for the performances of Mamma Mia on the 20th and 27th May. Package includes a 2 course dinner, top price ticket and a Q&A session with cast members after the show, for only £62.50