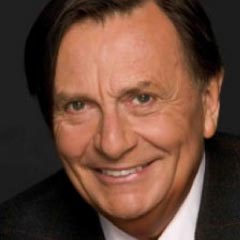 Legend is a word bandied about quite often in theatrical circles (and we are as guilty as the next fabulous showbiz site) but say Aussie Legend and there’s really only one living person who springs to mind and that is Barry Humphries. Or maybe Dame Edna. Or Sir Les Patterson.

And Aussie Legend Mr Humphries is bowing out of the West End in style with a spectacular farewell show Eat, Pray, Laugh! at the London Palladium that sees his alter-egos Dame Edna Everage, Sir Les Patteron and Sandy Stone take to the London boards one last time (probably).

It is easy to forget amongst the hundreds of credits for one man shows, tours, pantos and TV appearances that Barry Humphries has made as Dame Edna and crew, that he is also a strong character actor beyond his own creations.

Movie credits range from being the voice of  Bruce The Shark in Finding Nemo to playing Mrs. Crummles and Mr. Leadville in Nicholas Nickleby, and turns in Da Kath and Kim Code, The Hobbit: An Unexpected Journey, Spice World The Movie, Welcome to Woop Woop, The Leading Man, Immortal Beloved, Pterodactyl Woman Of Beverly Hills, Shock Treatment, The Getting of Wisdom, Side By Side and The Great McCarthy.

Barry Humphries is also a successful writer and landscape painter.