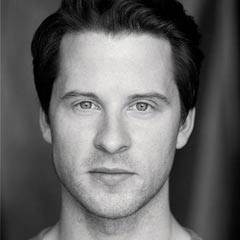 Robert Lonsdale plays the role of Private Robert E Lee Prewitt in the show, a part immortalised in the movie by Montgomery Clift.

Lonsdale’s stage credits include Brilliant Adventures for Caroline Steinbeis at the Royal Court, A Life for Eleanor Rhode at the Finborough Theatre, Anna Christie at the Donmar and Finding Neverland at the Curve for Rob Ashford, La Bete for Matthew Warchus in the West End and Broadway and workshop productions of Made in Dagenham for Rupert Goold and From Here To Eternity for Tamara Harvey. TV includes Silent Witness and A Passionate Woman.