Harry Potter star Daniel Radcliffe in The Cripple of Inishmaan at the Noel Coward Theatre. 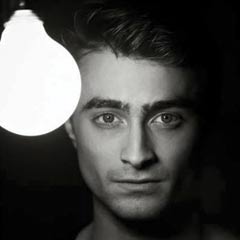 We may have watched Harry Potter star Daniel Radcliffe grow up in front of our eyes, but we shouldn’t be lulled into thinking we know him.

And he has done everything he can to confound our opinions of who he is. He’s stepped into horror movie The Woman in Black, based on the successful London show, and made it his own. He’s become a song and dance man, hoofing in How To Succeed In Business on Broadway to great acclaim. He has bared all (literally) in Equus in London and on Broadway. And now Michael Grandage has cast him in his revival of Martin McDonagh’s comic masterpiece The Cripple of Inishmaan set in rural Ireland, at the Noel Coward Theatre until 31 August 2013.