FLASH SALE: Save up to 39% on tickets to see the ultimate Beatles tribute show LET IT BE at the Savoy Theatre in London. 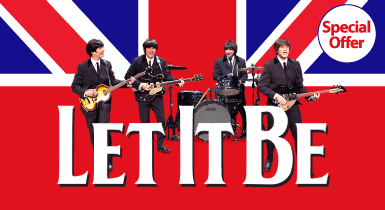 Celebrate the 50th Anniversary of the world’s most successful rock’n’roll band, live in London’s West End!

LET IT BE is a spectacular theatrical concert jam-packed with forty of The Beatles greatest hits! Relive The Beatles meteoric rise from their humble beginnings in Liverpool’s Cavern Club, through the heights of Beatlemania, to their later studio masterpieces with live performances of early tracks including: Twist and Shout, She Loves You and Drive My Car, as well as global mega-hits Yesterday, Hey Jude, Come Together and, of course, Let It Be.

Experience this multimedia rich electrifying spectacle which takes you back to the magical sixties when all you needed was love, and a little help from your friends!

SPECIAL OFFER: Save up to 39% on tickets – BOOK NOW

TICKET OFFER: Book tickets to the Beatles tribute show LET IT BE at the Savoy Theatre in London

Date: 18 April 2013
Written by: WestEndTheatre
Tags: Let It Be, Savoy Theatre, The Beatles