Save £25 on tickets to see Idina Menzel at the Apollo Theatre in London. 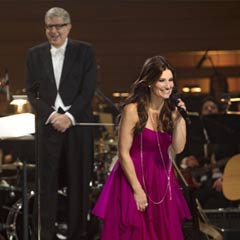 Idina Menzel is back in London for a rare series of concerts at the Apollo Theatre in London.

The Tony Award-winning star of Wicked and regular guest-star in Glee is returning to the UK following a series of acclaimed US concerts.

Backed by a 25-piece orchestra she will sing songs from both her musical theatre and pop career – and some exciting new material.

Idina is best known for originating the role of Elphaba in Wicked on Broadway, for which she won a Tony Award for Best Actress in a Musical. No stranger to London, she also played the role in the original West End cast.