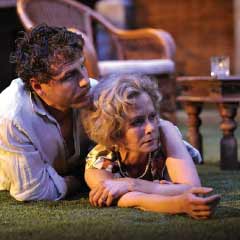 The first major production of Noel Coward’s play Volcano, a fascinating insight into the glamorous and sometimes scandalous world of wealthy expats, is currently running at the Vaudeville Theatre in London.

Enjoy tickets to see this fascinating play at a special discount – including upper circle seats reduced by 50% to only £7.50, or £29.50 off best available seats.

The play, set on a fictional South Sea island, sees infidelity, intrigue and romantic liaisons played out against the backdrop of a rumbling volcano, and filled with Coward’s sparkling wit and well-crafted dialogue.