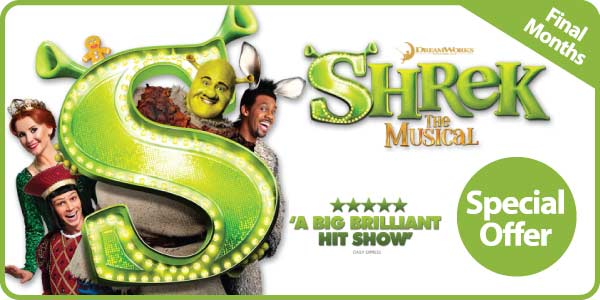 Catch Shrek whilst you can – and SAVE!

Shrek The Musical has announced that it will close on 24 February 2013 at the Theatre Royal Drury Lane. So don’t delay to book your tickets to this spectacular show based on the hit animated movies. PLUS we’ve put together a great big SHREK TICKET SALE including up to 36% off tickets for selected performances.

A fabulous cast includes Dean Chisnall as unlikely hero Shrek, accompanied by his loyal friend Donkey, played by Richard Blackwood. They are joined on their quest by the beautiful Carley Stenson as Princess Fiona, rescued from her tower guarded by a firey dragon. The show also stars Neil McDermott as the tiny Lord Farquaad.

The show features all new songs in this hilarious all singing, all dancing, irresistible adventure.