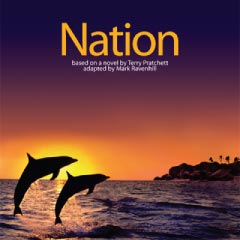 Adapted by award-winning playwright Mark Ravenhill, Nation is set in a parallel world, in 1860. Two teenagers are thrown together by a tsunami that has destroyed Mau’s village and left Daphne shipwrecked on his South Pacific island, thousands of miles from home. One wears next to nothing, the other a long white dress; neither speaks the other’s language; somehow they must learn to survive.

As starving refugees gather, Daphne delivers a baby, milks a pig, brews beer and does battle with a mutineer. Mau fights cannibal Raiders, discovers the world is round and questions the reality of his tribe’s fiercely patriarchal gods. Together they come of age, overseen by a foul-mouthed parrot, as they discard old doctrine to forge a new Nation.