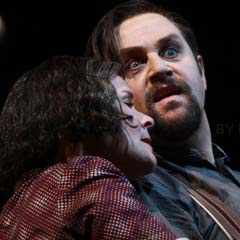 A wickedly funny tale of love and revenge, Sweeney Todd has been hailed by the Daily Telegraph as ‘a true classic by a true master’.

Michael Ball is Britain’s leading and best-loved musical theatre star. An Olivier Award winner and multi-platinum recording artist, his transformation into the Demon Barber has been called ‘the performance of his life‘ by the Daily Mail.

Oscar® nominee and BAFTA-winner Imelda Staunton is best known for acclaimed performances as Dolores Umbridge in the Harry Potter films, Miss Pole in Cranford and the title role in Mike Leigh’s Vera Drake. Time Out has hailed her performance as Mrs Lovett as ‘nothing short of astonishing‘.

Don’t miss out on this limited offer – get stuck in to a lip-smacking slice of theatrical pie.