Fast hurtling towards “National Treasure” status, Imelda Staunton is the current Queen of the West End as she plays Mrs Lovett alongside Michael Ball’s Todd in the acclaimed new production of Stephen Sondheim’s Sweeney Todd. 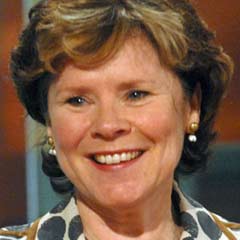 Staunton’s star has been in the ascendant for a long time, but a two-year-running stint as host of the Olivier Awards alongside Michael Ball, and a star turn in Sweeney Todd, has positioned the actress as a London Theatre big-hitter.

Starring as Mrs Lovett at the Adelphi Theatre, in Jonathan Kent’s Chichester Theatre production of the show, she has won enormous critical acclaim for her performance.

Imelda’s theatre credits include A Delicate Balance at the Almeida Theatre, much National Theatre work including Guys and Dolls and A Chorus of Disapproval, The Wizard of Oz for the RSC and Into the Woods at the Phoenix Theatre.

Book tickets to Sweeney Todd at the Adelphi Theatre in London