SPECIAL OFFER: Save £35 on tickets to see Placido Domingo and Angela Gheorghiu in concert at The O2 Arena in London 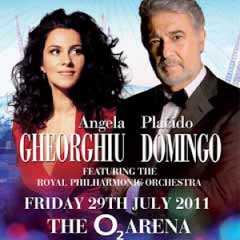 Two of the world’s most celebrated and accomplished opera stars will come together in July for a very special evening of song.

Angela Gheorghiu and Placido Domingo will join forces for a spectacular evening at the O2 Arena in London that promises to be a truly unique and exclusive opportunity to see these world-famous stars together.

Placido Domingo has earned his place in opera’s history books with a stellar career spanning some 50 years. As an artist in his own right and as a member of The Three Tenors, he became one of the most revered names in classical music, winning countless accolades including nine Grammy Awards. He continues to perform as both an outstanding singer in opera houses around the world, and more recently as a conductor.

Romanian soprano Angela Gheorghiu has become a global superstar, and has established herself as a brilliantly agile vocalist whose performances command attention from the very first note. She has sung an enviable roll-call of lead roles at the world’s major opera venues and has released a string of best-selling recordings.

An event not to be missed.

BOOK NOW: Save £35 on tickets to see Placido Domingo and Angela Gheorghiu in concert at The O2 Arena in London