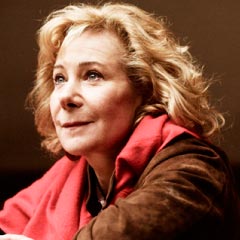 Following her acclaimed performance in All My Sons at the Apollo Theatre, the director of that play, Howard Davies, has cast Zoe Wanamaker again in his latest production, The Cherry Orchard at the National Theatre.

Howard Davies, who won a 2011 Olivier Award for his direction of The White Guard at the National, will direct Anton Chekhov’s masterpiece in a version by Andrew Upton.

Zoe Wanamaker’s extensive theatre credits include Much Ado About Nothing, The Rose Tattoo, His Girl Friday, Battle Royal, The Crucible, Mrs Klein and The Importance of Being Earnest at the National Theatre. Other award nominated and winning theatre work includes Loot in New York, The Last Yankee at the Young Vic, Dead Funny in Hampstead and the West End, The Glass Menagerie at the Donmar and Comedy Theatre, Electra at Chichester, the Donmar and on Broadway, Boston Marriage, and Awake & Sing!

Book tickets to The Cherry Orchard at the National Theatre

1 thought on “ZOE WANAMAKER in The Cherry Orchard”