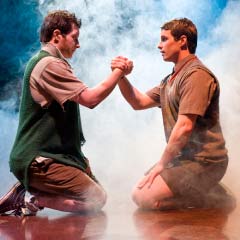 The incredible score includes Bright New Day, Marilyn Monroe and the emotionally charged hit Tell Me It’s Not True. Hailed as one of the best musicals of all time – scooping up no less than four awards for best musical in London and seven Tony Award nominations on Broadway – Blood Brothers is celebrating 21 years in London’s West End.

Westendtheatre.com users can now save Half Price on tickets to see Blood Brothers at the Phoenix Theatre in London

Book tickets to Blood Brothers at the Phoenix Theatre in London