Come From Away, the mega-hit Broadway musical, has opened in London at the Phoenix Theatre.

Critics varied hugely in their opinions, either absolutely loving this heart-warming, life-affirming show (Time Out, The Times, The Express), or feeling that it didn’t quite take the subject of 9/11 seriously enough.

Come From Away has a book, music, and lyrics by Irene Sankoff and David Hein, and is directed by Tony winner Christopher Ashley with musical staging by Kelly Devine.

Come From Away reviews

"Touching tale of kindness in face of terror"

"The cosy glow of kindness isn’t a fashionable subject in theatre. But this folksy Canadian musical by Irene Sankoff and David Hein makes no apology for its affirmative message, telling the true and touching story of how the Newfoundland town of Gander embraced 7,000 strangers after their planes were diverted there amid the chaos of 9/11."

"This show is a foot-stomping, heart-warming TRIUMPH"

"COME FROM AWAY is a musical based on the incredible true story of the tiny remote town that welcomed and looked after 7,000 passengers stranded after 9/11. It will make you laugh, cry and leave the theatre with a heart full of hope."

"The songs, which have a folk-rock feel, are good and Christopher Ashley’s direction and Kelly Devine’s musical staging ingeniously use rearranged chairs to evoke both a suffocating plane cabin and the diverse spaces opened to the visitors: there is one heartstopping moment when the passengers, hitherto kept in the dark about events in New York, gaze in silent horror at TV images of the Twin Towers. In a 12-strong ensemble, there are also striking performances from Rachel Tucker as a trailblazing female pilot, Robert Hands and Helen Hobson as loners who find love in unlikely circumstances and Jenna Boyd and Cat Simmons as two women united by maternal anxiety. The show could hardly be better done even if, as a work of art, I found it lacking in complexity and argument."

"See the show in the West End, though, and it takes all of ten seconds to be in its generous embrace. You stay there for the next 100 minutes: laughing, tapping your foot, wiping away tears, feeling good about humanity — what a rare, welcome feeling that is these days — without ever feeling you’re just being sold gloopy musical-theatre good cheer."

"It’s based on real-life accounts of how residents on the island of Newfoundland coped when 7,000 passengers, in 38 planes, were diverted to their small town of Gander after the terrorist attacks of 9/11.

What emerges from this is the most relentlessly cheerful and ecstatically wholesome feelgood show I’ve ever seen."

"This 9/11-set musical is a gently miraculous masterpiece"

"Musicals don’t come much more low-key, wholesome or Canadian than ‘Come from Away’. Writers Irene Sankoff and David Hein cook up the straightforward world of the Newfoundland town of Gander using a very straightforward set of ingredients. The cast wear sensible shoes and lumberjack shirts. They tramp across a wood-decked stage that evokes the huge skies of their tiny island. They sing their way through a set of folk-tinged songs that tell stories of the five days after 9/11, when 38 planes made emergency landings on the island’s huge, disused airstrip. And it’s all totally, soul-feedingly wonderful." 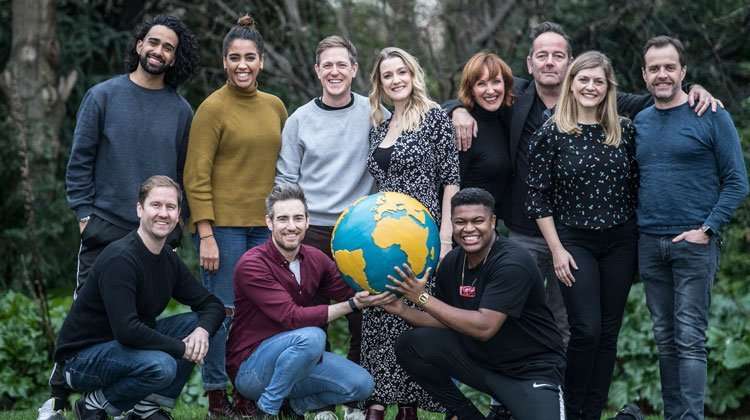