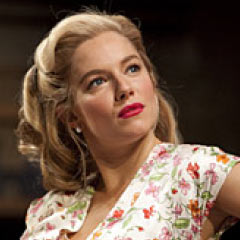 Sienna Miller’s on/off relationship with Jude Law has propelled her into the realms of acting stardom, but it’s for her work that she is becoming best known. Her 2009 Broadway role in the Roundabout Theatre’s production of After Miss Julie, alongside Frankenstein’s Jonny Lee Miller, garnered largely positive reviews.

And her next acting project is a return to the West End, where she last starred in a production of As You Like It at the Wyndham’s Theatre in 2005.  This time Trevor Nunn will direct her in a new revival of Terence Rattigan’s 1942 play Flare Path at the Theatre Royal Haymarket, from 4 March. The revival is timed for Terence Rattigan’s centenary this year and will see Sienna play Patricia Graham, a former actress married to a pilot but caught in a love triangle.

Miller’s recent films include The Edge of Love with Keira Knightley and G.I. Joe with Christopher Eccleston, and past screen work ranges from a starring role in Alfie alongside Jude Law in 2004, to forthcoming Billy Zane project Two Jacks. Other film roles include Layer Cake, Casanova, Factory Girl, Interview, Camille and Stardust.