Get Up, Stand Up! The Bob Marley Musical has opened at the Lyric Theatre in London to great reviews from the UK press.

The world premiere of this brand new musical has proved a smash-hit, with British critics raving about the show, and notablyArinzé Kene’s powerhouse performance as Marley.

Clint Dyer, who most recently co-wrote and directed Death of England: Delroy at the National Theatre directs the musical, which has a book by Billy Elliot writer Lee Hall.

Based on the life of the iconic Jamaican hit-maker, the role of Marley is played by double Olivier nominee Arinzé Kene, whose extensive theatre work includes Death of a Salesman (Young Vic), One Night in Miami (Donmar Warehouse), Girl From The North Country (Old Vic) and Misty (Bush Theatre & New York).

The show features unlimited access to Marley’s platinum-selling catalogue of music, including much loved classics ‘Exodus’, ‘No Woman No Cry’, ‘Waiting in Vain’, ‘Three Little Birds’, ‘I Shot the Sheriff’, ‘Could You Be Loved’, and ‘Redemption Song’

Get Up, Stand Up! The Bob Marley Musical reviews

"It’s a relief to report that this new show about the life of the great Bob Marley, father of reggae, Rastafari prophet and preacher of one love, does justice to its subject"

"[Arinzé Kene] gives a towering performance in the central role"

Read the full review
The Telegraph
★★★★★

"A brilliant show that gives Bob Marley back his bite"

"The reggae star's songs have been made toothless by ubiquity. This show changes that"

"Arinzé Kene is a knockout. This is a joyful night out that also feels like an important cultural event"

"'My name is Arinzé Kene and I will be Bob Marley,' and with those words, this stellar performer ascends to the West End leading man status that he has long deserved."

"In the closing moments, it feels like this isn’t just a joyful night out – it’s a major and important cultural event."

"Arinzé Kene mesmerises in an exhilarating tribute to a legend"

"Julene Robinson as his mother and Shanay Holmes as singer and beauty queen Cindy Breakspeare, his lover, are powerful presences."

Read the full review
The Times
★★★

"A little off the beat"

"... the flaws in this celebration of Jamaica’s greatest musical export may not prove fatal. "

"Marley is magic but the drama needs some redemption"

"As much as I love Marley and his music, this version, written by Lee Hall (best known for the Billy Elliot and Rocketman screenplays) left me slightly cold and faintly baffled."

Read the full review
The Guardian
★★★

"It’s the music that carries the emotional weight in this tale of love, loss and roots rock, starring the superb Arinzé Kene"

"Clint Dyer’s pulsating production has the spirit of a staged concert with spoken scenes tucked in between the songs, and with the emotional freight of the story carried in its celebrated music. Sometimes this means that character and dialogue are sacrificed but the music is infectious – and there is a central performance from Arinzé Kene that soars and tingles the spine."

3 thoughts on “‘Get Up, Stand Up! The Bob Marley Musical’ reviews round-up” 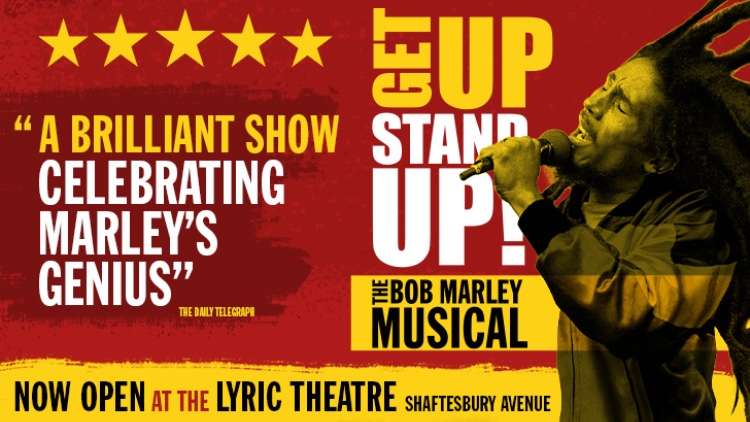