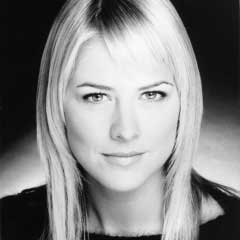 It was always going to be a tough gig replacing Sheridan Smith in Legally Blonde at the Savoy Theatre in London.

Smith originated the lead role of Elle Woods in the West End production and garnered a heap of positive reviews and waves of audience love in the part she played for a year.

But if anyone can bring them round it’s McFadden. The Irish actress is no West End novice, having won ITV talent show Grease is the Word in 2007 and played Sandy in the current production of Grease at the Piccadilly Theatre.

She has also been covering the role of Elle and playing the part of Serena in Legally Blonde since October, and she has well and truly made the part her own after taking over from Sheridan on 9 January, alongside a terrific cast including Denise van Outen, Simon Thomas, Alex Gaumond and Peter Davison.

McFadden’s other extensive theatre credits in both the UK and Ireland include a national tour of Seven Brides for Seven Brothers, Cinderella at the Theatre Royal Wakefield, Jack and the Beanstalk at the Gaiety Theatre Dublin, plus Singin’ in the Rain, Annie, Dance of Desire and Brighton Beach Memoirs.