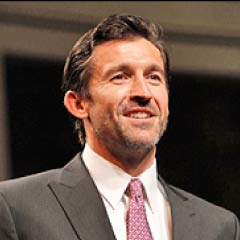 Jonathan Cake has been spending a fair amount of time on Broadway of late, so it’s good to see him come back to London – and to have some fun this Christmas in Richard Eyre’s new production of French farce A Flea in her Ear at the Old Vic.

His recent Broadway escapades include New York Theatre Workshop’s April production of Restoration written and starring Claudia Shear, plus Braham in Christopher Hampton’s The Philanthropist opposite Matthew Broderick, Iachimo in Cymbeline and Jason in Deborah Warner’s Medea with Fiona Shaw.

On the London stage Jonathan has appeared in numerous productions including the National’s Baby Doll and an acclaimed performance in Coriolanus at Shakespeare’s Globe.

TV credits include Extras, Mosely, A Dance to the Music of Time, The Government Inspector, Cold Lazarus, Six Degrees, Empire and Law and Order, with films ranging from First Knight to Brideshead Revisited.

The revival of Georges Feydeau’s 1907 French farce A Flea in her Ear is directed by Richard Eyre in a version by John Mortimer.