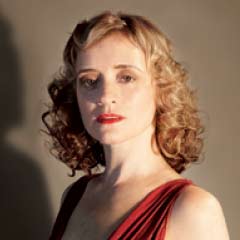 Mrs James McAvoy is back on stage in the West End this spring as she takes the lead in Thea Sharrock’s revival of Terence Rattigan’s Cause Celebre, timed for the writer’s centenary in 2011.

Anne-Marie trained at the Drama Centre in London and her career to-date has garnered much praise across TV, film and stage.

She was nominated for an Ian Charleson Award for her performance in King Lear at the National in 1997 and has performed a number of times at the venue including Collected Stories, War and Peace, Le Grande Magia and most recently Saint Joan, where she won Evening Standard, South Bank Show Award and Critics’ Circle awards for her performance.

Cause Celebre opens at the Old Vic Theatre on 29 March 2011, with previews from 17 March.

Based on a true story, Ann-Marie plays Alma Rattenbury who was put on trial in 1935, along with her 18-year-old lover, accused of killing her husband. Vilified by the public as much for her seduction of a younger man as the murder of her husband, the play examines the role of passion, guilt and loyalty in 1930s England.