The Royal Shakespeare Company’s production of Hamlet with Paapa Essiedu in the title role, will be broadcast on BBC Four on 21 June at 9pm.

Directed by Simon Godwin, Shakespeare’s searing tragedy is set in Africa and features a predominately black ensemble cast.  Essiedu, who won the 2016 Ian Charleson Award for his performance, was the first black actor to play Hamlet in the RSC’s history.

The BBC Culture in Quarantine programme features a series of acclaimed productions from the Royal Shakespeare Company, Shakespeare’s Globe Theatre and the Royal Opera House.

Shows currently available to watch include Macbeth with Christopher Eccleston and Niamh Cusack, The Tempest with Roger Allam and Colin Morgan, Emma Rice’s production of A Midsummer Night’s Dream,  Much Ado About Nothing with Edward Bennett as Benedick and Michelle Terry as Beatrice, Othello with Hugh Quarshie in the title role and Lucian Msamati as Iago and The Merchant of Venice with Makram J Khoury as Shylock. 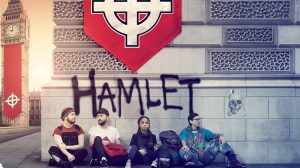