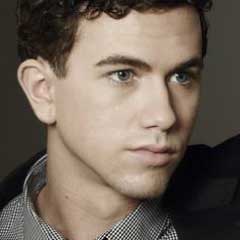 He may be best know for his four year stint in Coronation Street playing Craig Harris, but there’s much more to Fleeshman that soap.

An accomplished singer and musician, he released his album Neon in 2007 followed by singles Coming Down, Hold Me Close, Back Here and Can You Hear Me? Plus he won not one but two ITV talent shows – Stars in Their Eyes Celebrity Special and Soapstar Superstar. Oh, and he accompanied someone called Mr Elton John on his Summer Stadium and Red Piano tours.

TV roles have included All The Small Things and recently Moving On: Rules of the Game for the BBC. But it’s his stage work that is currently attracting the buzz.

He wowed audiences at the Savoy Theatre this year with his performance as posh cad Warner Huntington III opposite Sheridan Smith in Legally Blonde The Musical.

And now, his biggest challenge yet: following Patrick Swayze in a ghostly role that will require convincing acting and some stunning singing, starring alongside another powerhouse musicals star – this time up-and-coming Broadway baby Caissie Levy.

Ghost the Musical, which starts off at the Opera House in Manchester before opening at the Piccadilly Theatre in London in June, will be directed by Matthew Warchus (Deathtrap, La Bete), with music and lyrics by legendary pop and rock writers Dave Stewart (Eurythmics) and Glen Ballard (writer of Michael Jackson’s Man in the Mirror). The show will also feature the classic song Unchained Melody. Ghost The Musical will be designed by Rob Howell, with illusions and stage effects by Paul Kieve (Harry Potter and the Prisoner of Azkaban) and a script by the original Oscar-winning screenplay writer Bruce Joel Rubin.

16 thoughts on “RICHARD FLEESHMAN in Ghost The Musical”