Images have been released of the London production of ‘DEAR EVAN HANSEN’ ahead of its press night at Noël Coward Theatre this week.

The winner of six Tony® awards including Best Musical, as well as the 2018 Grammy award for Best Musical Theatre Album, Dear Evan Hansen is directed by four-time Tony Award nominee Michael Greif, features a book by Tony award-winner Steven Levenson and a score by the Tony, Grammy and Academy Award-winning composers of The Greatest Showman and La La Land, Benj Pasek & Justin Paul.

The show is a contemporary musical about a socially awkward teenager, who overcomes his inability to connect with people by fabricating a story about a classmate who has suddenly died.

DEAR EVAN HANSEN is now booking until 2 May 2020 at the Noel Coward Theatre, London. 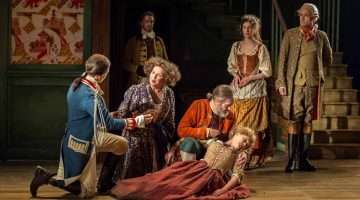 Reviews: The Beaux’ Stratagem at the National Theatre