Stylised images of Matt Tedford and Tom Bowen in the roles of devoted angels Michael and Gabriel in An Act of God have been released, ahead of its European premiere later this month.

The sinfully funny smash-hit Broadway comedy from Emmy winner David Javerbaum has  a 7-week run at the Vaults complex under Waterloo station from 27 November 2019.

Described as an alternative Christmas message, in 90 minutes God, played by ‘Mock The Week’ comedian Zoe Lyons, with the help of angels Michael (Matt Tedford aka Margaret Thatcher Queen of Soho) and Gabriel (Tom Bowen, Johnny Castle in ‘Dirty Dancing the Musical’) will deliver a new version of the Ten Commandments.

Answering some of the deepest questions that have plagued mankind since creation this divine intervention gives the first and last word on everything mankind has wrought on the planet.

Directed by Benji Sperring (‘Toxic Avenger the Musical’, ‘Night of the LIving Dead’), don’t miss this Broadway smash-hit as it comes to London, with tailor made material for a British audience.

An Act of God Tickets are now available to book.

An Act of GodLondon Vaults

An Act of God 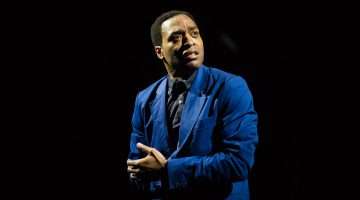