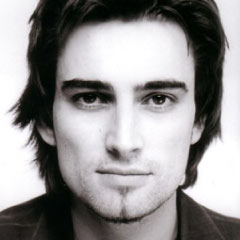 Next up is someone who more than holds his own in the hot, talented, one-to-watch category: Simon Thomas.

Most recently he “excellently” (according to Michael Billington in the Guardian) played Rapunzel’s Prince in Sondheim’s Into the Woods at the Open Air Theatre, and is no stranger to the Open Air having also appeared in Cymbeline, Twelfth Night and HMS Pinafore at the drafty venue.

Before playing a Prince he played the Lord of the Jungle in Disney’s Tarzan at Hamburg’s Neue Flora, and other roles include A Tale of Two Cities at the Theatre Royal in Brighton, Marguerite with Ruthie Henshall at the Theatre Royal Haymarket, Make Me A Song at the New Players Theatre and the Merry Wives Of Windsor for the RSC.

* We couldn’t quite decide if this still from Disney’s Tarzan at the Neue Flora Theater in Hamburg is actually Simon Thomas, but in the absence of anything forthcoming from their PR team we thought you could decide.