We were delighted to read that Baz 'Moulin Rouge' Luhrmann is to bring his first movie - Strictly Ballroom - to the stage.

We were delighted to read that Baz ‘Moulin Rouge’ Luhrmann is to bring his first movie – Strictly Ballroom – to the stage. 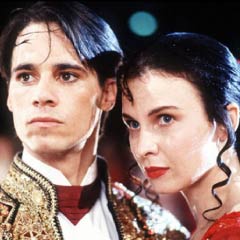 There is always much speculation about Baz converting his films into stage spectaculars (Moulin Rouge has been on the cards for ages), and their flamboyance and theatricality seem a natural fit with the sparkle of a show.

But as Baz tells Baz in the Daily Mail today, he’s unwilling to let just anyone have a play with his children: “A cynical version would  have been to find some bright spark and say “Why don’t you go off and do a jukebox version and I turn up on opening night  and go ‘Isn’t it lovely?”, which is clearly Baz having a dig at the general trend for stars and creatives to put their name to things without any creative input.

But he goes on, “One has to be both honest and true to what the movie was, but also daring with  the execution on stage”, and in the new stage version he intends to “aggressively address the question of the theatrical invention one has to go through to make the piece alive, edgy and forward-moving”.

We love you Baz, we love Strictly Ballroom, and if anyone can reinvent musical theatre its you, but isn’t it simply a jolly old story set to sequins?

Just get on with it man.

Australian Entertainment company Global Creatures seems an odd choice for Baz Luhrmann to team up with on Strictly Ballroom, although they are clearly not short of money having hoovered up the rights to the show worldwide and forever. The company has mainly specialised in bringing animatronics to the stage having scored a huge success with the arena tour of Walking with Dinosaurs, and are in current development on a Broadway production of King Kong (yes, really) and DreamWorks Animation’s How to Train Your Dragon. We wonder if they will try popping a couple of animatronic ballroom dancers into Strictly?

Our favourite quote from Global Creatures CEO Carmen Pavlovic on the creation of King Kong for the new stage show: “If we put Kong in that very contained environment of a proscenium, we’ve got to make sure that in swiping his arms he doesn’t inadvertently knock over a cast member in the process. We had a lot to resolve before we did that.”