The Man In The White Suit

ABOUT The Man In The White Suit

Exploding into the West End, the world premiere of The Man in the White Suit starring Stephen Mangan, Kara Tointon and Sue Johnston.

Based on the classic Ealing comedy film, The Man In The White Suit is adapted and directed by Sean Foley.

The Man In The White Suit is booking until 7 December 2020 at the Wyndham’s Theatre, London.

When Sidney Stratton (Stephen Mangan), invents a fabric that never gets dirty and never wears out, manufacturers and trades unions are terrified by the threat it poses to their industry and their jobs. Only Daphne (Kara Tointon) the mill owner’s daughter, shows Sidney any support as the bosses and workers chase the Man in the White Suit determined to destroy them both.

WHO’S IN IT? THE MAN IN THE WHITE SUIT CAST

Stephen Mangan will play Sidney Stratton, a role made famous in the film by Alec Guinness. Most recently, he appeared in a 2018 revival of The Birthday Party alongside Zoe Wanamaker and Pearl Mackie, and the concert performance of Guys and Dolls at the Royal Albert Hall.

In 2014, Mangan starred in the Olivier Award-winning comedy Jeeves and Wooster in Perfect Nonsense as Bertie Wooster, opposite Matthew Macfadyen as Jeeves. He has also been nominated for a Tony Award for The Norman Conquests, which opened in London and later transferred to Broadway.

Kara Tointon will play Daphne Birnley in the production. Tointon recently played Olivia in the Royal Shakespeare Company’s production of Twelfth Night, Eliza in Pygmalion at the Garrick Theatre, and Evelyn in Absent Friends at the Harold Pinter Theatre.

Sue Johnston is best know for her performances in The Royle Family, Brookside and Coronation Street.

The Man in the White Suit is adapted and directed by Sean Foley with set and costume design by Michael Taylor.

Why book The Man In The White Suit tickets with us? 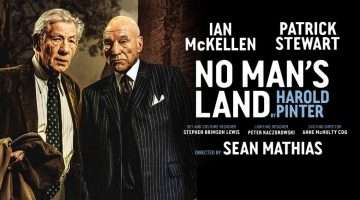 No Man’s Land at the Wyndham’s Theatre