The Bay At Nice

ABOUT The Bay At Nice

Richard Eyre directs Penelope Wilton & Ophelia Lovibond in the first London revival of David Hare’s The Bay At Nice since its premiere at the National Theatre in 1986.

Exploring a mother and daughter’s fight for personal ideals and domestic responsibilities, as well as the choices made both in life and art, The Bay At Nice is a battle of duty and desire.

The Bay At Nice is booking until 14 May 2019 at the Menier Chocolate Factory, London.

In Leningrad in 1956, Valentina Nrovka has been invited to the Hermitage to offer her opinion on the authenticity of a Matisse painting, as she knew the great artist personally. Her daughter Sophia, also a painter, meets her there to seek her mother’s help, both financially and politically.

WHO’S IN IT?: THE BAY AT NICE CAST

Written by David Hare with direction by Richard Eyre, set & costume by Fotini Dimou, lighting by Paul Pyant and sound by Gregory Clarke.

Why book The Bay At Nice tickets with us? 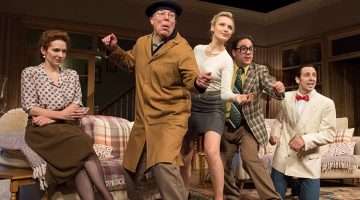