Meera Syal (Beautiful Thing, Absolutely Anything and The Kumars at No. 42), Lloyd Owen (Cleaning Up, Monarch of the Glen and The Young Indiana Jones Chronicles), Daniel Rigby (BBC Two’s Eric & Ernie and One Man, Two Guvnor) and Simon Rouse (Hangmen, Local Hero, The Bill) will reprise their roles in this rip roaring production.

In an exuberant new production by Jeremy Herrin (All My Sons, Wolf Hall, This House), Noises Off arrives at the Garrick Theatre for a strictly limited run, for fans to enjoy and new audiences to discover.

NOISES OFF is booking from 27 September 2019 until 4 January 2020 at the Garrick Theatre, London.

With technical brilliance and split-second timing, it takes us behind the scenes with a company of actors in a hilarious and heartfelt tribute to the unpredictability of life in the theatre.

WHO’S IN IT?: NOISES OFF CAST

Written by Michael Frayn, this production is directed by Jeremy Herrin (All My Sons, Wolf Hall, This House) with design by Max Jones, lighting by Amy Mae Smith and sound by Lorna Mundens.

★★★★ ‘As thrilling as ever’ The Guardian

★★★★ ‘These times call for laughter – and this delivers’ Sunday Times

Why book Noises Off tickets with us? 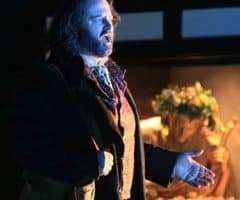 Photos: The Mastersingers of Nuremberg