From ‘enthralling’ and ‘chic’ to ‘boring’ and ‘gimmicky’, Van Hove’s modern take on this iconic and much loved Bette Davis film was always going to elicit mixed feelings.

All About Eve is booking until 11 May 2019 at the Noel Coward Theatre, London.

[Gillian Andersons’] performance as ageing actress Margo Channing in Ivo van Hove’s stage version of ‘All About Eve’ is absolutely one of those ‘I was there’ moments.”

“All About Eve works terrifically, in part because the cast and script are excellent, and in part because van Hove’s usual box of live video tricks is so apt for a story that always felt half film, half theatre. ”

“This is a show that reeks of chic. Yet, for all its skill, I found myself admiring its cleverness more than relishing its drama.”

“a clever, mixed-media hybrid that never achieves the emotional pull of first-rate drama.”

“Gillian Anderson is arresting in this emphatically successful update”

“Some of the live film stuff is very funny but it can steal the focus from the principal action. It’s peculiar that because of this, the film’s most celebrated line, “Fasten your seatbelts – it’s going to be a bumpy night”, doesn’t have the impact that it should.”

“Van Hove loves to strip things back, so we get minimal Broadway glamour and bustle – but less eye-catching experimentalism than you might expect. Period trappings are out even if the implicit social landscape of the original remains.”

“Gimmickry can be fascinating, as when Margo’s face is rapidly aged in a video time-lapse. But when done to excess, van Hoveian cleverness reduces the humanity in the theatrical experience.”

“This is a memorable production. It is done with tremendous panache and it confirms Miss James as a top-notch stage performer, and Miss Anderson as box-office gold. But they should have called it All About Ivo.”

“Van Hove’s paraphernalia is there – the cameras circling the stage, the video screen capturing and magnifying the action. But Anderson is a strong enough actress not to be lost in all that. She doubly proves her strength: she is not, like Davis, a swaggerer; she is a scalpel, who does not volcanically implode but slowly peels away her defensive layers. ”

“In the title role, James fares less well. She exhibits presence but small range. She is too obviously manipulative at the beginning, too simply nasty at the end; her mouth too constantly on the curl.”

“the production is too entranced with glamour to be sinister, the space insufficiently claustrophobic for quarrels to be threatening. There is a more haunting show circling this enjoyable, glitzy one.”

“Fasten your seat belts. It’s going to be a bumpy night,” declares Anderson’s Margo Channing to her friends, warning of the bender tantrum to come. In truth, the seat belt is optional; those who have seen the film, in particular, may be fine without. While the source material is simply too darn good not to remain entertaining, the adaptation rarely enhances it. As a stage production, it’s by turns scintillating and airless.”

“Fasten your seatbelts, it’s going to be a boring night… the multimedia staging knocks the wit out of this drama”

“a stylish and enthralling cinematic experience”

“this reinterpretation misses a lot of its humour, charm and bite. It’s clever and technically accomplished, but between its bracing opening and absorbing final section it doesn’t have enough spark. ”

“Anderson is cool and contained, more likely to seem brittle than ferocious. This means Margo’s classic line ‘Fasten your seat belts; it’s going to be a bumpy night’ lands without much dash.”

“though Van Hove’s adaptation sticks pretty closely to the original, it strips a lot of the joy and wit out of it. The result is glossy, but functional and superficial.”

“The casting of Anderson as Margo is one of the production’s greatest strengths. She is simultaneously brittle and radiant, poised yet fragile, while Dolan, as a woman who inadvertently sabotages both her friend’s career and her own marriage, provides another reminder of what a great actor she is.”

“Has a vampire had its way with “All About Eve”? The anaemic spectacle now sleepwalking across the stage of the Noël Coward Theater here shares a title, characters and much of its dialogue with Joseph L. Mankiewicz’s Oscar-winning 1950 film about the glamorous narcissists who inhabit the dark and glittering world of Broadway.”

“Yet as adapted and directed by the international auteur Ivo van Hove, what was originally a crackling, high-gloss satire now feels like a horror movie without a pulse.”

“His “Eve” is always on the edge of slipping into a coma, taking its audience with it.” 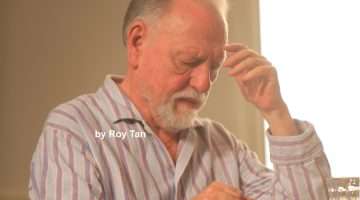 Full casting announced for The Father