9 to 5 The Musical now in previews at the Savoy Theatre, London.

Production images have been released offering a first look at Amber Davies, Natalie McQueen, Caroline Sheen, Bonnie Langford and Brian Conley in 9 to 5 The Musical which is currently in previews at the Savoy Theatre in London.

Based on the hilarious film starring Jane Fonda, Lilly Tomlin and Dolly Parton, 9 to 5 The Musical tells the story of three workmates pushed to the edge by their sexist over-bearing boss. Concocting a plan to kidnap and turn the tables on their despicable boss, will the girls manage to reform the office or will they come unstuck by the surprise visit of the CEO and Franklin Hart’s suspecting secretary. 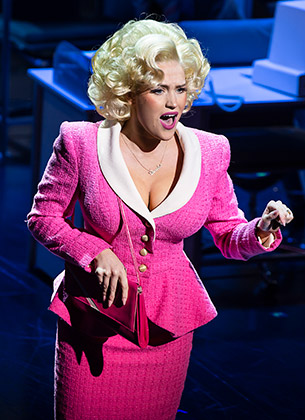 The musical features a book by Patricia Resnick, the film’s original screenwriter, and an original Oscar, Grammy and Tony award-nominated score by country legend and pop icon Dolly Parton.