ELIZABETH McGOVERN in The Starry Messenger

Elizabeth McGovern’s career spans theatre, film and television. Elizabeth is most well known for her role as Lady Cora in multiple award winning television show Downton Abbey, for which she was nominated for a Golden Globe and a Primetime Emmy and won a SAG.

Elizabeth can currently be seen in Bjorn Runge’s The Wife in which she stars opposite Glenn Close and Jonathan Pryce and in HBO drama series cite>The Handmaid’s Tale.

Elizabeth McGovern will star alongside Matthew Broderick (Ferris Bueller’s Day Off, Mel Brooks’ The Producers) as husband and wife in the West End premiere of Kenneth Lonergan’s drama.

What role does ELIZABETH McGOVERN play?

Elizabeth plays Anne, the wife of an astronomer at New York City’s Planetarium, who enters into an affair with a younger single mother.

Elizabeth has appeared in films such as The Commuter opposite Liam Neeson, Matthew Vaughn’s Kick Ass and Warner Brothers’ Clash Of The Titans alongside Ralph Fiennes. She received an Academy Award and Golden Globe nomination for her role in Ragtime, her second feature film, following her debut in Robert Redford’s Ordinary Peoplewhilst she was still a student at Julliard.

Other major film roles have included starring opposite Robert De Niro in Once Upon A Time In America and Sean Penn and Nicolas Cage in Racing With The Moon.

What is The Starry Messenger about?

Written by Kenneth Lonergan, Academy Award-winning writer of Manchester-By-The-Sea, The Starry Messenger is a bittersweet, comic drama about one man’s unblinking exploration of love and need to understand his place in the universe.
Find tickets to The Starry Messenger

The Starry Messenger will run for a limited season from 16 Mary 2019 until 10 August 2019 at the Wyndham’s Theatre, London. 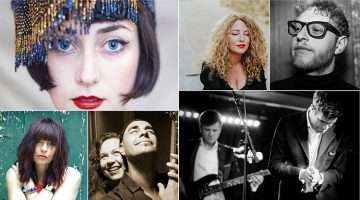 Get ready for Live At Zedel’s Jazz Week