Hailed as Shepard’s masterwork, this contemporary American drama is set in the searing heat of the Californian desert and pits brother against brother as a family tears itself apart, exposing the cracks in the American Dream.

Harington and Flynn both give convincing performances but although as brothers they are possibly mismatched.

True West is running until 23 February 2019 at the Vaudeville Theatre, London.

‘Kit Harington and Johnny Flynn are good, if slightly mismatched, as the brothers in Sam Shepard’s haunting play.’

‘Enjoyable as Matthew Dunster’s revival is, I felt the play works best in small theatres and that the central pairing doesn’t achieve a perfect balance.’

‘Even if the central casting leaves something to be desired, it remains a pungent Shepard’s pie.’

‘The play itself can feel like a series of bizarre riffs, but is packed with similarly outrageous moments.’

‘Even as they’re trashing the room, smashing objects and downing whiskey, the whole thing has the feel of an undergrad party where everyone’s pretending to ‘GO KERRRRAAAZZZY!!!’ in the most controlled way possible. And that’s never a story to remember.’

‘The late Sam Shepard’s True West is a remarkably delicate flower. Set it down in the wrong place, fail to moisten it with sufficient droplets of subtle directorial care, and a dark comedy of wild pungency can wilt into something oddly odourless.’

This comes through in the performances of Game Of Thrones’ Kit Harington and singer-songwriter-actor Johnny Flynn. They’re both giving the finest stage performances of their careers to date, but you get the sense that they’re both having enormous fun too. 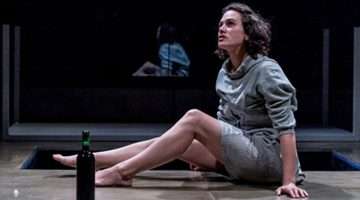