Showstopper! The Improvised Musical - a new performance every night.

ABOUT Showstopper! The Improvised Musical

Want to be the first, and last, to see a brand-new musical?

Critically acclaimed Olivier award-winners for Best Entertainment And Family Show, The Showstoppers have blazed a trail in improvised comedy and delighted audiences globally. As they approach their 1000th performance, this incredible show comes to The Other Palace for a limited run of one-night-only musical extravaganzas.

Guaranteed to impress, The Showstoppers create shows packed with high drama, superb lyrics, dazzling dance routines and catchy melodies – entirely made up on the spot!

Each night, audience suggestions are instantly transformed into an all-singing, all-dancing production with unpredictable and hilarious results!

Whether you fancy Sondheim on a ski lift, or Cole Porter in Poundland – you suggest it and The Showstoppers will sing it

Every performance is a brand new musical West End hit waiting to happen – so don’t miss out!

Showstopper! The Improvised Musical is booking until 16 March 2019 at The Other Palace Theatre, London.

‘If this is what improv can do, you wonder why anyone bothers writing anything down.’ – The Times
★★★★★  top-dollar amusement that doesn’t let up from frisky, low-key start to standing ovation-inducing finish. It’s so polished, it defies belief – Dominic Cavendish, Daily Telegraph
★★★★★  Refreshing, edge-of-your-seat, laugh-out-loud funny, raw and satirical, polished inventiveness. There is nothing like it on the West End – British Theatre
★★★★  improvisation skills second to none make Showstopper! a must-see – The Stage

Why book Showstopper! The Improvised Musical tickets with us? 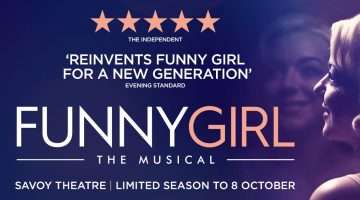 Funny Girl at the Savoy Theatre