Friel’s dramatic account of nationhood, which sees the turbulent relationship between England and Ireland play out in one quiet community, is as pertinent today as when he wrote it in the 1980s.

It follows Owen, the prodigal son, returning to rural Donegal from Dublin. With him are two British army officers. Their ambition is to create a map of the area, replacing the Gaelic names with English. It is an administrative act with radical consequences.

Translations runs until 11 August at the National Theatre, London.

Brian Friel’s play about the infinite mysteries of language is richly realised in a meticulous Ian Rickson production, with excellent performances from a strong cast.

Friel’s masterly play is steeped in irony and itself beautifully written. My own favourite line comes when a ragged old Irish Homer worshipper, asked by Owen if he is well, simply replies: “Dodging about. There is, however, no dodging about in Rickson’s production, which feels both large and intimate.”

“The depth and richness of this 1980 classic by Brian Friel are sounded beautifully in Ian Rickson’s magnificent revival in the Olivier.
In a superbly judged performance as Owen, Colin Morgan makes the character’s gradual shift from shiny, semi-citified eagerness to gnawing disillusion a quietly harrowing one.

Rickson and his designer Rae Smith brilliantly use the Olivier to give a mythic dimension to the proceedings, the hedge farm building cut into vast landscape of boggy earth. A tall staircase seems to chime with the fabric of the National itself, as if concretely connecting the past with the present – as does stunning momentary effect at the end.

With our anxieties over Brexit and borders, this is very pertinent time to revive the play and it’s wonderful to see and hear it stretch to its true magnitude in this venue.”

“It takes some time to tune into Friel’s particular brand of finely wrought understatement. But this account of what’s perhaps his best play savours its rhythms, and that’s crucial, because at root it’s a vision of the power of language — the importance of preserving it, the barriers it can create, and above all the ways that words are like fossils, stamped with the imprint of the past.”

“Brian Friel’s play is a masterpiece, though its delicacies are not well suited to this theatre.

Overall, nowhere else does Friel meditate so deeply or compellingly on his own sense of liminality between British Northern Ireland and the Republic, and even an imperfect production such as Ian Rickson’s is a rich experience indeed.”

In a way, Friel’s play about a British Ordnance Survey expedition’s attempts to map and translate the place names of a rural slice of Donegal in 1833 is so rock solid that it’s tempting to think all director Ian Rickson needs to do is make sure his cast know their lines and point them in the right direction.

Friel has provided the special effects in the language; in a way, all a cast needs to do is not screw them up. This they surely don’t: Rickson’s revival is awash with talent, foremost Hinds as the shambolic but shamanic Hugh, and the charismatic Colin Morgan as Owen, whose burning intelligence and passionate love of language have driven him towards the British, not away, as he enthusiastically aids a mapping project whose deeper consequences he cannot predict.

There is one major directorial intervention, brief but unmissable. Right at the end, the backlights turn into watchtowers with black-clad, machine-gun-toting soldiers atop them, in a clear allusion to The Troubles. Is it a bit on the nose? Perhaps, but then, as Brexit threatens to drive a fresh wedge between Britain and Ireland, it would be a bit toothless not to make the allusion. In any case, Friel’s exquisite, diamond-cut play can most certainly take it.” 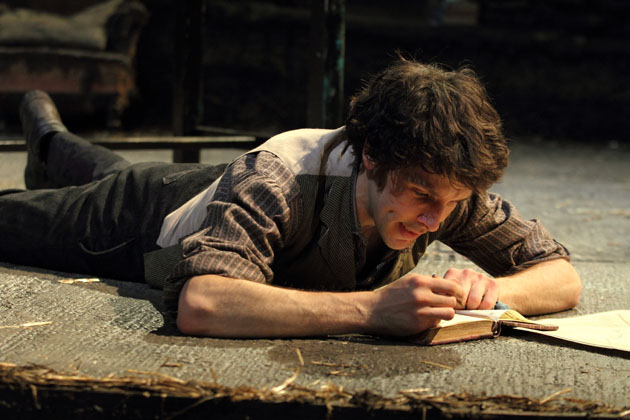